Upon arrival at the airport a host will meet and assist you in transferring to the hotel and help you in registering. In the afternoon City Tour of Lima and Larco Museum - This half day tour visits both the colonial and modern sections of this "City of Kings." Colonial sites include the lovely Plaza de Armas with its cathedral and palace, and the exquisite Torre Tagle Palace modern day seat of the Ministry of Foreign Affairs. In modern Lima, drive along the exclusive residential areas of Miraflores and San Isidro. Continue to the Larco Museum, founded in 1926, it showcases remarkable chronological galleries providing an excellent overview on 3000 years of development of Peruvian pre-Columbian history. Located in a unique vice-royal mansion of the 18th century built over a 7th century pre-Columbian pyramid, is surrounded by beautiful gardens. Features the finest gold and silver collection from Ancient Peru and the famous erotic archaeological collection, one of the most visited Peruvian tourist attractions. 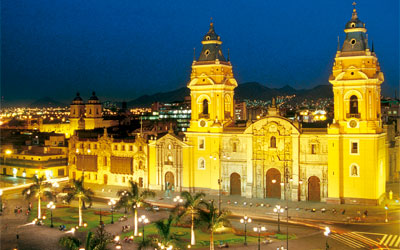 Breakfast at your hotel. Transfer to the airport for your flight to Iquitos. Reception at the airport, brief city orientation and transfer to the Explorama dock. Twenty-five mile journey down the Amazon River to Ceiba Tops, where rooms with air conditioning and private bathrooms provide the comforts of home in the rainforest. Afternoon hike in the beautiful primary rainforest reserve surrounding the lodge which includes many huge trees festooned with epiphytes. After dinner there may be local flute or guitar music at the El Toucan Bar or the guides are always ready to relate some of the many legends of the Amazon forest. Overnight Ceiba Tops. (B,BL,D) 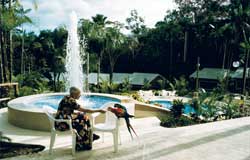 Morning boat ride, spotting for dolphins, to visit a small village of Yagua Indians where your guide will explain the local Yagua Indian culture and how it was affected by the arrival of Europeans and the passing of time. There will also be an opportunity to see some of the local crafts and for a demonstration of the blowgun which some of the Yagua elders still use for hunting. Afternoon walking excursion to the neighboring town of Indiana. Originally a Franciscan mission, Indiana has grown into a large river community with its own market, high school and small hospital. Overnight Ceiba Tops. (B,L,D) 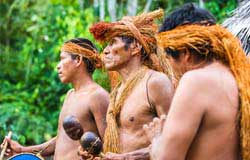 Your choice of morning walking or boating excursion to further enjoy the rainforest and Amazon River. Afternoon transfer to Iquitos and to the airport. Upon arrival at the airport a host will meet and assist you in transferring to the hotel and help you in registering. (B) 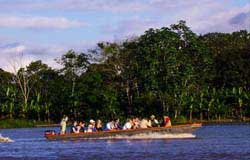 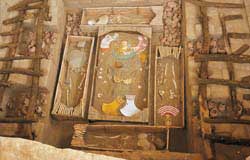 Breakfast at your hotel. Visit one of the most important centers of the ancient Moche. This pre-Inca civilization, a warrior culture, once dominated the valleys of the northern coast of Peru. Experience the amazing adobe engineering of the Temple of the Sun (sol), the tallest pyramid in the Americas at a height of 48 meters, which is estimated to have involved over 200,000 workers in its construction and over 140 million adobe bricks. Steps away is the temple of the Moon (Luna), the Moche political center where recently uncovered friezes of mystical images are believed to belong to a divinity of sacrifices. Continue to Chan Chan, the former capital of Chimu Empire. This Empire reached its apogee in the 15th century, not long before falling to the Incas. The planning of this huge city, the largest in pre-Columbian America, reflects a strict political and social strategy, marked by the city's division into nine 'citadels' or 'palaces' forming autonomous units. This pre-Columbian adobe city is famous for its archaeological site in South America! Continue with a visit to the city of Trujillo, known as "the City of the Eternal Spring", where you will visit the Main Square, the Cathedral and the beautiful residential and commercial areas which contain grandiose colonial houses and well preserved porches, balconies and churches such as the Colonial Mansions of "Casa Iturregui" and "Casa Bracamonte". Transfer to the National University of Trujillo Museum, that contains cultural expressions of Peru´s diverse Pre-hispanic epochs such as: ceramics, weavings, metal, etc. Transfer to the airport for your flight to Lima. Upon arrival at the airport a host will meet and assist you in transferring to the hotel and help you in registering. (B,L) 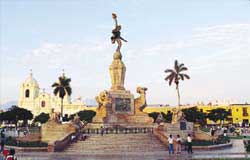 Breakfast at your hotel. Transfer to the airport for your flight to Arequipa. Upon arrival at the airport a host will meet and assist you in transferring to the hotel and help you in registering. Arequipa City Tour and Santa Catalina Convent - Your half day sightseeing of this beautiful city, placed on the World Cultural Heritage list by UNESCO, features Mixed Baroque churches and mansions from the Colonial Period like the Monastery of Santa Catalina, called "a city within a city", a Spanish city in miniature with stone streets, beautiful patios, and plaza. It is a masterpiece of colonial architecture, and houses some of the finest examples of Spanish American religious art. Since 1970 visitors have been able to stroll through the streets and cloisters that during colonial times were the refuge of female nobility who had decided to shut themselves away from the world and dedicate entirely to prayer. (B) 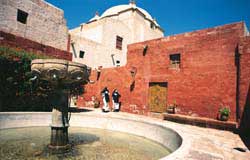 Breakfast at your hotel. Early departure towards the highlands passing through Yura-Pampa Cañahuas and La Pulpera with good possibility of observing groups of wild vicuñas and fighting cattle. Stop en route to see petrogliphs in the Caves of Mollepunco and in the town of Callali to see natural hill formations with the appearance of enchanted castles. Continue to La Calera to enjoy the thermal baths under the stars. (B,L,D) 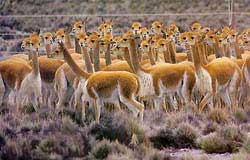 Breakfast at your hotel. To maximize your probability of seeing condors we depart very early towards the "Cross of the Condor" at about an altitude of 15,000 feet, which grants visitors spectacular views of condors wheeling across the Colca Canyon, the world's deepest. Drive a little further in to the canyon to see some pre-Inca ruins, pre-Inca burial grounds, to watch the way of life in this remote land and to admire the impressive irrigation system and the fertile mountains terraced for farming of the Colca valley. The afternoon ride to Puno features unique natural scenery of the Peruvian Highlands. (B,L) 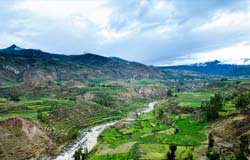 Breakfast at your hotel. Visit to the Uros Indian and Taquile Island at Lake Titikaka - This full day excursion will take you to the highest navigable lake in the world, to visit the floating islands of the Uros Indians, considered themselves Lords of the Lake, and they were convinced they had black blood because they did not feel the cold of the lake and the winter. Continuing to Taquile where a native community of about 400 families still lives with the traditions of the XIV century that respect the principals of an Incan way life. Taquile is a very important site on Lake Titikaka for its a archeological remains, the sacred and ceremonial sites, the festive activities, their rituals and for the daily life of the inhabitants which is dedicated to farming, textile production and fishing. (B,L) 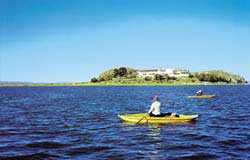 Breakfast at your hotel. Bus journey through the Peruvian Andes from Puno - Today one of South America's most extraordinary overland trips takes you by bus to Cusco passing through striking highland scenery and picturesque Andean villages. Upon your arrival in Cusco, the former capital of the Inca Empire, a host will meet and assist you in transferring to the hotel and help you to register. (B,L) 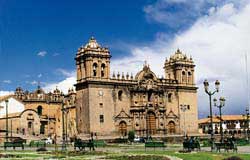 Breakfast at your hotel. Free morning. Tour of Cusco and its Ruins - This afternoon's tour of the oldest continuously inhabited city in the western hemisphere includes important landmarks of enchanting Cusco and also the nearby ruins of Kenko, Puca-pucara, Tambomachay as well as the Sacsayhuaman fortress. Once the center of the Inca civilization, modern Cusco is a delightful combination of Inca and colonial architecture. During the tour, you will visit Cusco's Cathedral, Santo Domingo Church and the Plaza de Armas. (B) 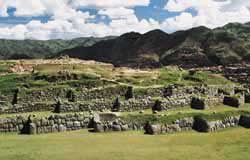 Full Day Excursion to the Pisac Indian Market and the Ollantaytambo Fortress
Breakfast at your hotel. Morning departure for a drive through the fertile countryside of the Urubamba Valley to the colonial village of Pisac where a unique Indian Market takes place daily. The variety of products offered is overwhelming, from pottery with reproductions of archaeological pieces, to all kinds of textiles, jewelry and Peruvian handicrafts. During your visit to this bustling marketplace you will have the opportunity to bargain with the artisans and indigenous traders. Grab the items you like, you will hardly see the same one again.

Continue to the Ollantaytambo archaeological complex, the Incas built it as a fort that included a temple, agricultural terraces, and an urban area. There are two distinct sectors: The religious and worship zone, and the residential area. Ollantaytambo was an important administrative center with probable military functions if one considers the walls and towers. There are also traces of ancient roads and aqueducts. The town of Ollantaytambo is called a "Living Inca Town" since the inhabitants maintain very old practices and customs. Lunch is at a beautiful country estate on the shores of the Urubamba River. (B,L) 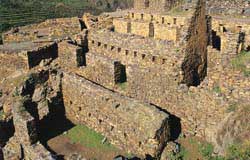 Breakfast at your hotel. Full Day Excursion to Machu Picchu - Early wake up for a train ride through the sacred valley of Urubamba to the "Lost City of the Incas," Machu Picchu. Perched 8,200 feet above the valley, it was hidden by mountains and semi-tropical jungles for 400 years until discovered by Hiram Bingham of Yale University in 1911. Archaeologists believe that the Inca "Virgins of the Sun" took refuge from the Spanish Conquistadors here. Guided tour of the ruins upon arrival. All transfers are included. Lunch is at the Orient Express' Sanctuary Lodge located just a few steps from the Inca citadel. Afternoon return to Cusco. (B,L) 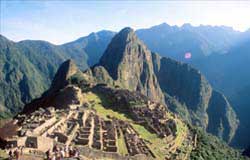 Breakfast at your hotel. Transfer from hotel to the airport for your flight to Lima and then take your connecting flight to home. (B) 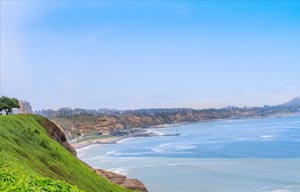 Back to Discover Peru